Robots are our future Part 2

The sensor, which provides the "feeling" of the robot, giving it the robot recognizes the object with which to work.

As soon as the first samples of more or less developed robots, the man wanted mechanical creatures have replaced it in many dangerous places. For example, without the robot Dante II person would ever looked in the crater of an active volcano. Without the robot Sojourner to our knowledge of Mars would have been much more scarce. This unit in 1997 landed on the planet's surface and transmitted to Earth a huge number of photos.

Home robots are not adapted to extreme conditions, they are unable to perform complex work. Their task is to help people in everyday life and entertain him. There are plenty of inexpensive home robots: robotic vacuum cleaners, robot those riding lawnmowers, man, and many others. But if the first task is to help in everyday life they are right, then the second to entertain things are much more complicated. A very small number of robots are able to entertain people. For example, the robot from NEC, in addition to purely domestic functions, is able to speak. This robot knows more than 300 sentences and recognize even more.

But most of all knows how the Sony dog Aibo. This small animal has excellent eyesight, hearing, touch. A dog can recognize his master, to respond to commands, affection. Aibo has four stages of growing up: infancy, childhood, adolescence, and adulthood. And only you can determine what will be the adult Aibo: the nature of the dog can be different, as the dog has various emotions from happiness to anger. By the way, unlike most other robots, this dog is very agile, she can run, jump, stretch, perform acrobatic stunts. By the way, if you want you can teach Aibo to play soccer and dance.

It is easy to predict how the robots would simplify our lives, carrying us chores, guarding our homes, helping us in our jobs.

Here experts from the company White Box Robotics and created a robot, the 912 "MP3". This mobile multimedia center that can connect to any screen and play videos. In addition, the body has 5.5 inch LCD monitor. "On Board" is quite powerful speakers. 912 MP3 the conceptual model it is not possible. Rather, it is a demonstration of the platform that allows you to turn an ordinary computer system into a robot.

But that's not the only robot company. Entertainment is entertainment, and somebody needs to take care of our security. Especially for this was created 912 "HMV".

Its mission is to patrol the apartment or office and sent to the owner of the email address or cell phone the record of any "disorder". Family 912 was presented to the court audience, who visited in November 2004 the first exhibition of robotics in the United States RoboNexus 2004. Unfortunately, yet to buy such assistants will not work, as their development is in the very beginning of commercial use is not possible. 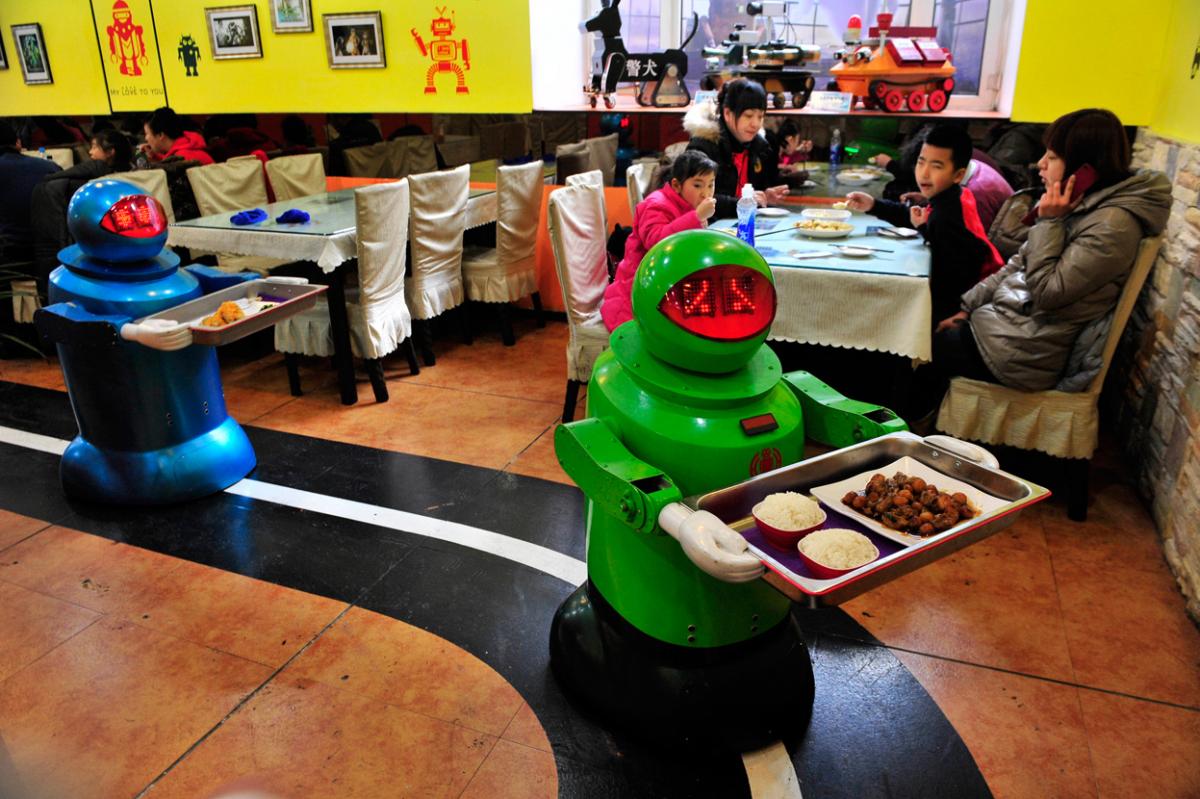 According to many scientists, the future of robotics nano robots. Of course, now this area of human knowledge has not even grown to the level of conventional robotics, but it is developing dynamically.

What are nano robots? These little cybernetic mechanisms can work with atoms (to stitch them with each other, in other words, do), to move on different surfaces replicate (reproduce themselves). Thus, using a microcosm to virtually any design in the macrocosm. Nanorobots will "build" atoms from our homes, vehicles and more. In the human body, they will be available to monitor his health and treat him (to destroy viruses and cancer cells, to monitor the condition of the heart), signal in the event of serious damage.

How will nano bots to create complex macro objects? Yes elementary! After all, any object can be described as a collection of atoms that are in the "right" places. Thus, with the help of "an army of" nano bots will be possible to obtain an exact copy of the object in the macrocosm.

Everything I wrote about nano robots, looks the cleanest water of unscientific fiction. But, no! NASA conducted a longitudinal study and confirmed the possibility of creating self-replicating robots. And the company Zyvex has promised that it will submit the first nano robot assembler to 2010.

Almost every invention of man is reflected in art. Robots did the opposite: works by many of science fiction inspired scientists to work on robotics. And began the era of robots in art in January, 1921, when Prague hosted the premiere of a new play playwright Karel Capek. The plot of the play was quite familiar to us, but for the time extremely: the robots of first of all help people, and then grab control over humanity. By the way, Capek introduced in our speech the word "robot" is a slightly modified Czech which means forced labor.